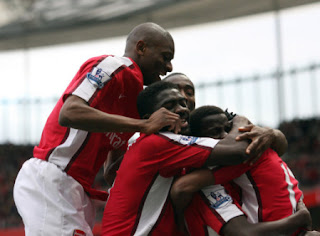 This is a performance that had us all purring again. Chances galore, misses galore but also goals scored galore.

The score would have been at least seven or eight nil if it wasn’t for Bendtner’s profligacy in front of goal.

Arsene Wenger got the balance of the team right with two choices that gave the team penetration and height.

The penetration came from the deployment of two fast and dangerous wingers in Arshavin and Walcott.

They provided width but more importantly mobility in the forward positions. The Blackburn defenders did not know how to deal with their movement and when you have players like that in the side chances will be created.

An added bonus that arises when pacy wide men are in the team is the lightning fast counter attacks, a facet of Arsenal’s game that has not been seen for a very long time.

And it was always on against Blackburn, with Walcott (who got his clattering alright) and Arshavin duly obliging. Scoring a quick goal always helps of course.

The second choice was the inclusion of Djourou in the starting line up alongside Toure.

Wenger obviously wanted to counter what everyone expected from a Sam Allardyce team. Long, high balls and throw ins at every opportunity.

Djourou, Toure and Song (who always provided aerial support at dead ball situations) were on the whole equal to this tactic.

I can’t wait for Fabregas, Rosicky and Adebayor to get back. What a bench we are likely to have!

Steady, confident and secure. I never worry that he will make any mistakes and on the few occasions he was called upon to make the saves, mostly from free kicks that Denilson gave away, he was not troubled at all. 8

I was disappointed with his performance today. He looked tired to me and made some mistakes in his passing and crosses. He was also caught asleep when Petersen got through for Blackburn’s only chance of a goal. 6

He had a much better game today when compared to his below par performances lately. He was full of running, defended well and took the right positions in the defence. 7

He has been in form lately and today he was faultless. Great in the air and always there to cut out any balls aimed for Roberts. He is starting to look like the Toure of old. 8

He obviously needed to get some match fitness because he looked rusty against West Brom. He was very good today.

He won every high ball that came his way and he has the added ability to head the balls to a distance thus relieving the defence and gaining important ground. 7

He is beginning to become more consistent in his performances, the sign of a player maturing. He carried out his duties almost to perfection, looking every bit of an authoritative defensive midfielder.

He broke up attacks, defended in front of the back four, won the ball and passed it accurately to the forwards whenever that was on. 8

A much improved performance today from the little Brazilian. He was everywhere doing everything. Winning the ball, creating the time for him to look up and pass it accurately.

I and a lot of you berated him after the Roma performance but today we have to hold our hands up and say that he was immense. He tired by the end which resulted in making a few mistakes but overall I enjoyed his performance.8 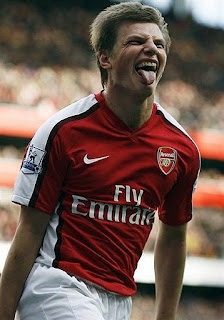 The more games he plays the more he is showing us what a fantastic player he is.

He is not yet at his peak fitness but even so he is going to become a massive player for Arsenal football club.

He was there for the first goal forcing the mistake by the Blackburn defender, Oojer, to turn it into his own net.

But for his second his skill in turning Simpson inside out and then scoring from the tightest of angles was awsome.

He also chose to ignore Bendtner’s calls for the ball which if he had the chances were that Bendtner would have missed it! 8

Samir was active and mobile in the first half but tired in the second, the effects of the Roma game catching up on him. He played in the hole behind Bendtner and connected the midfield with the attack very well. 6

He provided the width on the right hand side creating a lot of problems for Warnock. His low ball into the Blackburn area created Arsenal’s first goal and was generally a thorn in Blackburn’s side.

I consider his return to fitness as very important to Arsenal as he provides the width and the pace that we so lacked this season. 7

I will not be that critical of Bendtner. Yes he did miss chance after chance and in other circumstances against a more dangerous team his misses would have been very costly.

But he has been showing great improvement in his game recently. He is very enthusiastic, full of running, his touch on the ball very good and most importantly he gets in those dangerous positions to score the goals.

Let’s be honest about it. The only thing he got wrong today was the putting away of the chances. If he can get that right then you have a very good player. 6.5

He was berated by a lot of us but he stuck to it and he is getting his rewards lately. He wasn’t on for long but he had an impact scoring Arsenal’s third and fourth goal. 8


Come on the Spurs!

Posted by Arsenal Analysis at 6:12 PM

let's be honest, that wasn't the only thing wrong with Bendtner, his feet aren't fast enough to adjust to change and his first touch is plain crap. I like the guy but he's simply not good enough for the Arsenal.

Bendtner needs to get his act together, because once Adebayor gets fit and back in the squad, Bendtner would be back on the bench. He has been really wasteful and like u said, if it was against a tougher opponent, then we'll regret those chances wasted!! Every goal counts and goal difference can play a bitch come end of the season.

Walcott coming back is at an amazing time of the season for us. He totally destroyed the Blackburn defence.

I agree with you that Nasri was a lil quiet, but he has played alot of games this season, he needs a breather and Vela can cover him.

Eboue is really turning his life around, but i have a bad feeling in my mouth that he'll leave for free in the summer. I see a deja vu of Flamini all over again.

Arshavin is proving to be a nuisance to defences. His pin point passing are deadly!! The amount of times he tread thru the ball to Bendtner for Bendtner to only miss

odd, i found nasri to be far better in the second half - yes, tiring towards the end but his passing was excellent once moved central.

I wasn't really impressed with Djourou and he certainly wasn't better than Sagna. I think Nasri deserved a slightly higher score (he was certainly better in the second than the first) and I don't think Eboue deserved an 8 even though he did score twice, because he also missed a good chance and they were two simple chances really. Good to see that he's confident though.

Everyone who has a pop at Nik needs to remember that he's not our first choice striker he's a young lad who deserves time. If you look at United, Liverpool and Chelsea he's not supposed to be our answer to Rooney, Torres and Drogba, he's a 21 year old 4th choice striker- equivalent to Welbeck, N'Gog and Di Santo (or whatever his name his). Out of those four, who would you rather have??

Good analysis! Blimey! Wasnt user when id be saying that on here!!!

Fanner said... Match of the moment was when Arshavin ignored Bendter call and showed him how to score a goal. Sorry Arshavin, I was wrong to think that u might be that great. Thanks for proving me wrong.

once again your ratings are a tad off, eboue was on the pitch for 5 mins scored a tap in and a pen and he gets the same rating as arshavin who was outstanding for 90mins. He is by far and away the best player we have at the moment til Cesc comes back. I don't think your giving him the credit he derserves.

Bendtner adds something. He links better than Adebayor. I think he will be massive for us when he gets some consistency. Is he a number one player like Torres etc, obviously not but he adds something off the bench and will only get better. Song was MOTM for me.

What happened to adebayor? Doesnt a hamstring only take 3weeks. He's been out for longer? Maybe wenger's working on his fitness as he hasn't been running as much as last season

Song is 2nd MOTM if there is such thing...i think Song is improving and seems like he's better than Denilson..hope he can up his good work and maybe earn a place alongside Cesc...

I'll second that comment about Song.
He came out 1st in almost every challenge and is it just me, or has his passing ability improved 10 fold in the last couple starts. (how about that little knock on to Theo)
If he keeps it up , it'll be hard not to play him beside Cesc. Saying that, Burnley and Blackburn aren't Liverpool and Man U.
Great game, hopefully a sign of things to come down the stretch

It is still such a young side. Fits and starts. Enough to finish ahead of Villa, one hopes, possibly a semifinal or two. I bit like Wenger had planned all along, eh?

Oh come on, Bentner has got us about 3-4 late match winners if it weren't for him we would be about
7th by now he just needs to get that first touch and he'll be a great striker oneday, give him time.

Song was really good! Finally a good DM after Vieira!!!

Hey 1970's you got it wrong. WALCOTT got injured against HULL CITY not BLACKBURN. Although earlier in the season he had a good game against blackburn in which EBOUE scored. Spot on analysis, Great game. Come on Tottenham (i feel dirty)

WE GOT OUR ARSENAL BACK.