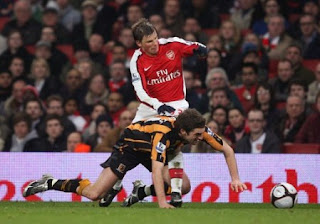 Andrey Arshavin seems to do a lot of his talking through his personal web site. As he explained he was delighted for having provided another assist for Arsenal’s important first goal scored by Robin Van Persie.

“It was a difficult position. To score from there, I needed to hit the top left corner, an easier option was the pass, which resulted in a goal” he said showing how mature a player he is.

Indeed one of the reasons why Wenger brought him to the Emirates was his age, 27, and the experience that goes with it.

His explanation for taking so long to score was that Arsenal in the first half were playing in a slow tempo which allowed Hull to get players behind the ball.

“Our attacks were quite slow, which allowed Hull to close the spaces, in some cases they displayed real heroics. They were wasting time as well.

I'm glad that the referee started booking them for time-wasting in the beginning of the second half although he could have started in the first”.

But what surprised Andrey was the use of only one match ball during the game. This added to the time it took to restart the game either from a throw in or a corner as the players had to wait for the ball to be retrieved.

“They (Hull) benefitted from using only one (match) ball and that was pretty surprising for me. Every time the ball goes out, you have to wait for it.

The attacker loses momentum because of that, letting defenders get back and close the free spaces, it slows the game down. It gives an advantage to teams who play a slower game. I'm used to having balls scattered all around the pitch”.

Indeed we think that Andrey has a point. For Champions League games FIFA allows a number of match balls to be used during a game. We have seen even at the Emirates in European ties how quickly a ball boy throws the ball back to the player ready to bring it back into play.

The Premier League however chooses to be behind the times, as always. Its rules allow for only one match ball which often results in delays and gives an unfair advantage to teams wishing to adopt delaying tactics. Like most teams visiting the Emirates…

But in the end class showed through. Wenger made the substitutions and the players carried out his half time instructions which were to play at a higher tempo.

“He told us that while we were doing the right things, we needed to speed up a bit to get the result. He asked us to stay positive about the game till the final whistle” Arshavin said.


Posted by Arsenal Analysis at 5:48 PM

One gets the impression Wenger makes it difficult for the boys at times with his formation. Van P cannot play as the lone striker. Yesterday he tried Vela in the role. The only person who can perform effectively in that role is Adebayor hence if unavailable he should be looking to go with 4-4-2 or even 4-3-3.

almost everything he said is exactly what I was thinking, that first half was soooo gooooodamn slowwwW!!!!

I remember one bit Sagna musta waited almost 20 seconds for the ball to get back to him.

Seeing a fast tempo is the key to our attack play, why dont we have like 2000 balls around the pitch!?!?

First thing Arshavin did after Persie scored is he pushed Gibbs who was running to him for celebration back to position to restart the game as quick as possible. He obviously showed the spirit that he wants to win, he wants to beat these f*cking cunts call themselves The Tigers. I love that fact. Great player. Great character.

Unfortunately the performance of both teams are not in the headlines but Brown's comments and the alleged spitting incident is.

I am more impressed than Arshavin's attitude compare to his first class football skills. Strong determination, positive attitude, brave enough to confront his team mates and urge them to do the right thing despite his English is not even up to scratch. I had my doubt about him but now they are all vanished.