Arsene Wenger will not want to sign a mega star forward for two reasons.


First he will demand to start every game. This will be difficult to put into practice as Giroud is now a pivotal player in Arsenal’s formation of 4 2 3 1 and also in his tactical importance of holding the ball, bringing the midfielders into play and scoring goals.


And changing Arsenal’s formation to accommodate the new striker in a 4 4 2 set up would be stupid to say the least and would be silly to put into jeopardy what has been achieved so far with Giroud’s contribution.
That’s why players like Benzema and even Suarez are now out of the question for Arsenal. Notwithstanding the fact that Liverpool will not sell the latter to a “rival”. And for the same reason players like Dzeko, Jotevic and Demba Ba will not come to the Emirates.


Secondly the transfer fee of a player like Benzema and the related wages would be enormous, in the Real galactico range, making such a transfer mostly uneconomic and nonsensical when your first choice to lead the line will, in any case, be Giroud.


Now, the forward that Arsenal will want to buy will have to be a player that a) is not a galactico and b) will be at that stage of his career where coming to Arsenal will be a step up. He will also have to, at the same time, fulfill his aspirations of appearing in the World Cup (if his country has qualified that is).


Another characteristic will have to be that he is not averse to sitting on the bench if need be and awaiting his chance to come through injury, loss of form, red cards or rotation.


Such players exist everywhere, in all the leagues of the world and Wenger knows where to find them.


BUT it is now the end of November and the January window will not allow Wenger to bed the player in as he could have done if it was the preseason.


The players that would add value to the squad will, in my opinion, be:


He is very good at receiving the ball with his back to the defender, has lightning pace, can play in all forward positions and can score goals. Transfer fee minimal if he does not sign a contract soon. Otherwise will be in the 8 to 10 m.


Very strong, can take defenders on, can play in all forward positions and can score goals.


Technically very good, can play in the number 10 position too and can score goals. Will fit into the Arsenal way of playing very nicely.


Tall enough and skillful enough to play that front man role. Can bring other players in the game and has the awareness to provide the assists and of course score the goals himself.


The other option, if Wenger does not fancy the PL market, is to avoid the January transfer window altogether and hope the Podolski will be a good enough cover for Giroud. 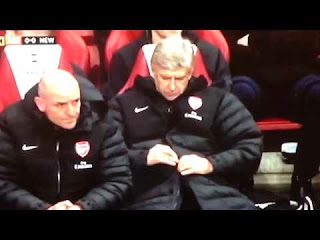 I don't know what you think but every single time that Arsene Wenger wears that ugly, shapeless long coat we lose the game.

I get the jitters when he is pictured trying desperately to zip it up. His nervousness then shines through these manic attempts to get some cover and warmth. I then begin to lose any confidence I may have mastered before the game convincing myself that the three points are in the bag.

I am sure the same feelings are transmitted to the players and they get even more nervous amongst themselves resulting in just the outcome they are trying to prevent.

What I am saying here is not a joke. When I used to play (in my own level) we had a coach who was always nervous before an important game. This would osmosisize through to us and would inevitably result in a below par performance.

So advice to Mr Wenger:

1.Get a decent coat to wear on the dug out.
2. And learn how to zip it up BEFORE you go out on the pitch.

Revealed: The fee Arsenal have to pay to get Nigerian wonderkid

Kelechi Iheanach’s performance at the just concluded Fifa Under 17 World Cup, where he won the Golden Ball award, has not gone unnoticed by some of the elite clubs in Europe.

This includes Arsenal. Chief scout Steve Rowley has watched the youngster in action and has been impressed.

"I can confirm that Arsenal FC's Steve Rowley, acknowledged Kelechi Iheanacho's talents early in the World Cup and has said some very nice words about him," Henry Galeano the player's agent said.

Nigeria won the tournament and Iheanacho scored four goals in the final against Mexico.

Greek side PAOK has also entered the race for his signature but it is expected that should Wenger give the go ahead the young player will want to follow in the footsteps of Nigerian great Kanu to Arsenal.

The fee is expected to be 400.000 euros rising to 700.000 with appearances and other performance related bonuses.


Posted by Arsenal Analysis at 4:25 PM No comments:

Arsenal lacked composure, a tall centre back and width (Ratings)


They also had several players vastly underperforming.
Remember the home game against Dortmund. The Arsenal players started very nervously. They couldn’t get their passing game going, their usual fluency was not apparent and they hardly created anything of substance until the last minute of the first half. In the second things got better.

Something similar happened against Man Utd but the difference was that United were not going to let their lead slip. They had to win the game to get back into the title race. They were very combative as they always are against Arsenal and it worked.


Secondly Arsenal missed their leader in defence. It’s difficult to say if he would have got to RVP’s header but his domineering presence and combativeness would have gone some way to reducing the nervousness in the rest of the team.
But the most striking aspect in Arsenal’s play was the lack of width and Ozil’s absence as an influence on the game.


Playing Ramsey on the wing was never going to work. Not only did he look tired he offered no penetration.
You can’t put square pegs in round holes.
Gnabry came on and he created so much down the right wing in the few minutes he was on than Arsenal created the whole game before! Thank God Walcott is coming back after the break because we can’t go on without pace and penetration on the wings.
Ozil was a nonentity. He has been so in the last few games but Wenger never rests him or substitutes him. He provided nothing, nothing. Cazorla the same.

In conclusion we got done because United wanted the game more than us, were more combative, we missed Mertesacker, key players did not perform and had no width.

But we will be back make no mistake about it.

Arsenal are slipping under the radar

I am finding myself giggling with satisfaction when I hear all these TV and Radio so called experts when they all, without fail, do not consider Arsenal as a genuine title contender. The latest example is the verdict of the two distinguished guests of MOTD, Murphy and Shearer.


You see these people are afraid to stick their necks out in case they are ridiculed. Arsenal after all have not won anything for a number of years now. Why would it change they think.


And long may it continue I say, because they are all doing us a favour, helping reduce the pressure on the players and also making them put that extra effort in every game to prove them wrong!

They do have a point of course. We seem to be light on the center forward and on the ‘Flamini’ position. But in response to this there are three arguments to be made.


Firstly our competitors have more or less their own dependency on a high class center forward.


Man City are not the same if Aguero is not playing.


Man Utd the same if RVP is out.


Chelsea don’t know who their best forward is. Is it Torres, Demba Ba or Eto? Are they good enough?


You might say that these teams do have an alternative if any of those players is out injured. Arsenal do have Podolski to come back but more importantly we can go out in the January window and buy a centre forward.


Secondly Flamini’s position was very adequately covered by Arteta in the Liverpool game. And of course we didn’t have Flamini last season but ended the last ten or so games of the campaign with a much much better record than the eventual champions! So even if we do not buy a defensive midfielder we can cover for that position well enough. 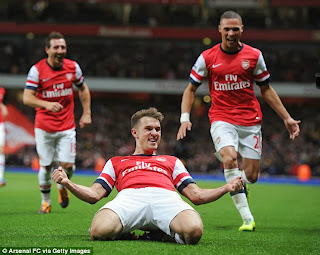 Thirdly and more importantly it is the overall performance of the team that wins games and not individual performances or weaknesses.

When the team is collectively working well, keeping the ball, dominating possession and defending throughout the pitch then, as happened against Liverpool, we have nothing to fear.

Imagine of course if we did go out and bought cover for these two positions.


Then we will no longer be under the radar!