Wenger’s change of tactics indicate a radical change in philosophy

Arsene Wenger has been changing his way of thinking in his transfer policy in recent years by bringing in more mature players. Gone are the days when anyone over the age of 23 or so would not make the short list of possible transfer candidates. Ok I am exaggerating a little bit but you get my drift.

What has not changed on the pitch however has been his playing philosophy.


He plays a game of ball possession, uses only one defensive midfielder and the other midfielders as well as BOTH full backs play their game in the opponents half of the pitch.


That’s why whoever plays in defence for Arsenal will always look vulnerable as protection is at a minimum. And that’s why Wenger’s teams always look frail at the back.


Yet against Bayern there was a change of philosophy and therefore tactics.


Firstly the defending mentality adopted was one that had all the four defenders keeping a tight line, moving together in unison and the midfielders dropping back to form another line of defence.


This kept the opponents mostly outside the area having to shoot from that distance. As the full backs, at least in the first half, were more often than not where they should be (at the back ready to close the avenues on the wings) there was some proper defending going on.


Secondly Arsenal defended from the front. When Bayern’s defenders had the ball they were immediately closed down by Arsenal’s forwards as well as the more offensive midfielders. Tactically this meant that their defenders had to play the long ball forward or at least play passes under pressure.


The result was that Bayern could not play their normal passing game taking the ball from defence through the midfield onto their attackers. That’s how Arsenal’s first goal was scored when Bayern lost the ball in midfield.


Lastly Wenger decided to bypass the midfield and Arsenal’s passing game. When Mertesacker or Koscienly had possession they often chose the long ball on Giroud’s head with our midfielders working hard to win the second ball.


Quite a radical change if you ask me as it goes directly against Wenger’s philosophy.


But what it achieved was to render Bayern’s strong area rather superfluous even though it was an admission that our midfield is not as good as theirs.


Which is true but Wenger does not usually face up to this fact does he? He normally plays an open game with the same ball possession philosophy and tactics whoever the opponent is.


Will he adopt the tactics employed against Bayern in the Premier League?


I believe that he should carry on with the defensive tactical changes and the pressure on their defenders when they have the ball. We don’t need both our full backs bombing forward all the time however.


And our midfielders should be more aware of their defensive duties. The long ball to Giroud is not something that I would suggest as we can compete in midfield with our passing game especially with Wilshere in the team.

Jenkinson the new star at Arsenal 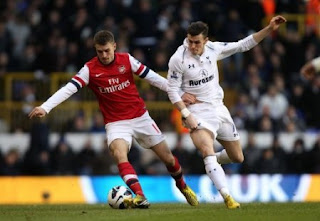 There were several Arsenal players that excelled at Bayern. Fabianski produced a very competent performance and made a terrific save when Robben was through on goal.

He made me feel that I could trust him. His defenders trusted him and this is a very important quality for a goalkeeper. He will keep his place in the line up for the rest of the season.

Koscienly should start every game. He is resilient, quick, combative has a big heart and can score too. He had a tremendous game.

Rosicky I felt had a good game even if his passing was not up to his usual standard. The importance of the game and the bad quality of the pitch did not help of course.

He ran all over the pitch, pressing their defenders up front and provided the link between our defence and the forwards. He will get a run in the team now that Wilshere is out and I feel that he will prove to be Arsenal’s match winner in quite a few games for the fight for a top four place.

But it was another player’s performance that excited me.

Carl Jenkinson had a fantastic game. To put in such a high quality performance for a player of his age and considering the relatively short period that he has been playing for the first team shows that he is star quality.

The run from the opponent’s half tracking Robben’s foray into Arsenal’s territory and sliding to put in the tackle for the ball was something we have not seen an Arsenal defender do for a long time.

His dash across Arsenal’s box to try and thwart Robben from having a clear shot at goal was I think instrumental in making him rush his shot which Fabianski saved.

He knows how to defend and has strength, both mental and physical. I feel that he will get better and better with every game he plays. Wenger will then have a big decision to make if Sagna left the club at the end of the season. Does he buy another experienced right back or does he promote Jenkinson to first team duty.

The best option of course is to keep Sagna for another season and alternate the two according to fitness and form.

But if this option is not on then I know what my answer will be.

Koscienly and Coquelin the tactical changes for the derby


Arsene Wenger has to decide how to approach this extremely important game against Spurs on Sunday. The philosophy to be adopted will determine to a great extend the outcome of the game and possibly Arsenal’s participation in next season’s Champions League.

What he should do is not what he chose to do in the game against Bayern.

Instead of acknowledging Bayern’s threats and quality and trying to combat that, he chose to play like he would always play against any average team.

In that game he adopted a very attacking philosophy ignoring the protection that the defence badly needed and choosing players that were too offensively minded.

The three midfielders were Arteta, who played in front of the defence and stack to his defensive duties as he always does.

Ramsey who is definitely not a defensive midfielder and is usually out of his depth for most games in the Premier League let alone against a top European team. He was in any case more often than not stuck further out on the wide side of midfield.

And Wilshere who did not sit back to protect the defence of course but was further up field organising the attacks.

The three more forward players were Walcott, Podolski and Cazorla.

Cazorla did not play as an out and out winger of course but was coming inside more often than not. But he also is not a defensive minded midfielder is he?

So we were playing a very important game WITH ONLY ONE DEFENSIVE MIDFIELDER SITTING IN FRONT OF THE DEFENCE. No wonder our defenders looked fragile and harassed.

Any defence of any team would really struggle with the kind of protection that Wenger offers to the Arsenal defenders.

This must not be repeated in the important games.

In addition and to make matters worse Wenger’s tactics always force the full backs into a wing back role where they are required to bomb forward. And quite often both full backs do this at the same time!

The conclusion is that it is not our defenders who are not good enough but the offensive minded tactics and formation that are to blame.

And that is why all Wenger’s teams will always be defensively frail.

All this has to change against Spurs, starting with the inclusion in the starting line up of two defensively minded and disciplined midfielders.

They will offer a protective wall in front of the defence and more importantly provide the cover on the flanks to counteract Spurs’ obvious strength which is on their wings with Bale and Lennon.

The two midfielders should be Arteta and Coquelin. Diaby is not 100% fit and in any case he is not that disciplined to stay back and provide cover.

The more offensive midfielder will be Wilshere and so he should be. He will also be aided by Cazorla who will be coming inside to help with the play making duties.

Wenger has to consider which is the lesser of two evils. Does he play with only one defensive midfielder and two more creative in Wilshere and Cazorla with Podolski on the left wing? He will after all offer better protection by tracking back than Cazorla.

Or does he start with what I am suggesting and rely on the two defensive midfielders to cover on the flank when needed.

The other important decision will be who plays at right back. It is obvious that Wenger will choose Jenkinson but I think Koscienly should be preferred.

He is more experienced, played well in that position for Arsenal before and will be up for the fight against Bale, if he stays on the wing.


One thing he must not do is start with Ramsey.