Brazil coach calls for “punishment to fit the crime” on Eduardo 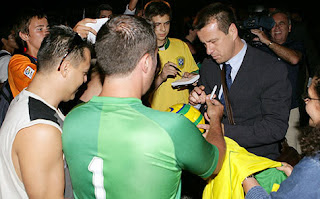 Dunga the Brazil coach and his assistant Jorginho have been speaking ahead of Brazil’s friendly game against Sweden which is to be played at Arsenal’s Emirates stadium later this month.

They have called Arsenal’s Gilberto, Liverpool’s Lucas and Chelsea’s Alex into the squad which contains some younger players in preparation for Brazil’s participation in the Beijing Olympics.

Amongst them are Milan’s Alexander Pato and Robinho of Real Madrid.

Speaking in Rio De Janeiro both coaches felt the need to also comment on the unfortunate injury suffered by Brazilian born Eduardo Da Silva who suffered a compound fibula fracture and a dislocated ankle after a ferocious tackle by Birmingham’s Martin Taylor.

“Football is a sport of physical contact, but sometimes it is exaggerated. In the case of Eduardo, the defender placed the foot over the ball to catch his opponent” Dunga said.

Both coaches called for the laws to be corrected so that the punishment fitted the crime.

Jorginho himself a world Cup winner with Brazil (in 1994)said:

“Football has much tradition and we know how difficult it is to change. But look at what happened with Eduardo, the offender was only punished with a three game ban”

Dunga also agreed: “The laws need to be changed. We have to protect the players with technical ability and quality” he said. 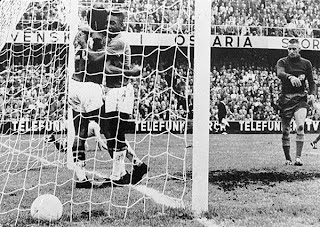 Dunga is in charge of the Olympic team with Brazil attempting to win their first soccer gold medal.

But this game against Sweden is intended to comemorate the 50th anniversary of the first world title for Brazil.

Wenger should have asked for a season's ban on Taylor or as long as Eduardo is out of the game.

Heard the FA have asked Blatter to mind his own business.This shows the FA are unwilling to take further action against Taylor.
I look forward to FIFA implementing new laws to punish the thugs in football to commensurate with injuries inflicted.
By the way I hope the FA will punish Taylor with a longer ban of say ten matches in addition to the normal three match ban.
This will send a signal to the thugs in the game they can't go oninjuring other without suffering severe retribution.

If Eduardo was white and Taylor was black the punishment would have been a 10 game ban and would have every menber of the white media and pundits calling for a life ban, yes my comments are harsh but it's the country we live in and these are rules we play by regardless of what anyone says.
Taylor went in studs up to do Eduardo and everyone and his dog is trying to protect him, if Vieira had made that tackle he'd have been done by the police for assult, no problem!!!!!