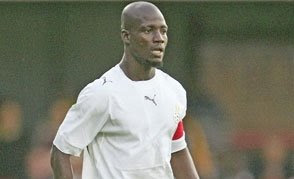 All the interested clubs, including Arsenal, would have lapped up the chance to observe from close up the fitness levels of much sought after midfielder, Stephen Appiah, last night in hot Tripoli.

As we reported on this site yesterday Appiah started this World Cup Qualifier on the bench but his chance came pretty quickly when on the 22nd minute Chelsea’s Michael Essien was stretchered off with what looked like a serious injury after being cynically hacked down.

The Chelsea player missed the start of the Premier League because of a calf injury and only recovered last week.

But the midfielder looks set for another spell on the sidelines with the injury looking serious as he wept while he was taken off.

He was replaced by Captain Stephen Appiah, who was making his first appearance in a competitive match after a nine-month injury-induced absence.

Appiah didn’t look rusty for having been out of action for so long as he was brilliant with his passes and tackle. Agogo and Muntari in particular were unable to utilise his inch-perfect passes failing to find the target.

Laryea Kingston who had a quiet game like most of his colleagues was withdrawn in the 70th minute for ex Arsenal player, Quincy Owusu-Abeyie. 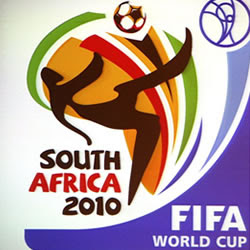 Libya had the best chances but the bar and woodwork denied them repeatedly.

Goalkeeper Richard Kingson produced the game’s best save in the 72nd minute when he tipped a goal bound chip from Omar Dawood beyond the crossbar.

Kingson, a Wigan target, was on hand to make great saves again blocking point blank shots as Ghana struggled to contain their opponents.

The game looked like ending in a goalless draw until Harrison Afful (!) mistimed his clearance and Ahmed Osman took the chance to poke the ball past Richard Kingson for the opener in the 84th minute.

You can watch it on the video screen.

Appiah was discussing a 40.000 a week salary with West Ham prior to Alan Curbishley’s resignation and if Arsenal are willing to match that then his move to the Emirates could be inching nearer.

You will probably hear about it here first rather than the national press!


Appiah aims to prove his fitness for interested clubs tonight

Appiah to decide on Arsenal move after Friday?


Posted by Arsenal Analysis at 9:56 AM

Lots of conjecture that Appiah has failed a medical with us ? Who knows what to believe ? haven't seen much of the lad but comes highly rated by many.

Why are you so sure this is happening? Do you actually know something or are you putting two and two together and making five?

Great site but I don't think I can believe this so I haven't reported it on my site. It could be true hence the reason wenger was so relaxed during transfer window but then again where's the source? Where's the scouts? Did anyone see them? All questions need answering.
http://arsenalcolumn.wordpress.com/

Here's a Benfica fan declaring his support to Arsenal against the corruption of FC Porto in the Champions League.

So I let you know this, in order to make you understand how their victories were obtained all over this 25 years:

- FCP's President, Pinto da Costa (PC), and many collaborators were caught in about 50 phone calls to referees or referees' president, asking for easy games.

- The trade was made often with prostitutes, vacations and money.

- Due to the limitations to phone listening by the police, many accusations were drop and never came to court.

- However 3 games went to court and are expecting to be judged. In one of the matches it's known and proved that the referee was in PC's house in the evening before the game.

- At this time the Portuguese FA also started a inquiry in order to investigate the facts involving the 3 matches.

- Why is that? Why attempt and not consumed corruption? Because the Portuguese FA regulations ridiculously consider that even if you ask for the favour and pay for it (what is proved for the 2 games) it's needed to prove that the referee really helped the paying team. That is so subjective that the experts failed (or were asked to fail) to prove this benefice. However the referee's, incomprehensibly, were condemned of consumed corruption. No need to say that this regulations were made by a very well known FCP Supporter, also involved in football TV shows where he is representing the club.

- So PC, who asked and paid for the help, was merely guilt of attempt to corrupt. The sanction for this is the deduction of 3 points per game (6 in total) in the season when the sentence was read. This was in the end of last season of Portuguese league.

- As they were more or less 20 points ahead at that time and with the fear that if they recur the punishment could be taken this season, they didn't do it, declaring to anyone that they really are corrupts. However, in a personal way and not dangering this season to FCP, PC recurred himself as he was also condemned.

- When UEFA declared that FCP may not participate, due to a regulation made after the calciocaos in order to punish corrupt clubs that are not really punished in their own countries, they rushed to try to involve FCP in PC recursion. This could be possible in Portugal because in a condemnation where more than one person (or entity) are accused for the same facts if one condemned recurs and wins, all the other condemned are beneficed. But that was not the case, because in one of the matches it was not PC that corrupted the referee, but a collaborator. That means that FCP could never recur for that match, as the deadline for that was passed and PC didn't recurred for that match.

- So, in first place, they tried to confuse UEFA, sending paid Portuguese FA members to UEFA, saying that PC's recursion could benefice FCP. Then, when his recursion was about to be decided, in a meeting of a comitee of 7 Portuguese judges, and very close to the UEFA's deadline to solve this problem in order to punish FCP this season, the comitee's president, observing that 5 of the 7 judges were voting for the condemnation, finished the meeting, without any decision made. However the other 5 members dismissed their president (something they could do) and started another meeting and declared PC as guilty of all charges.

- Of course that the confusion created by the comitee's president allowed FCP to recur about the second meeting and UEFA, with no effective condemnations when the deadline came, nothing could do.

- 15 days later, the second meeting was validated and the condemnations were effective, but not in time to avoid the corrupts to participate in the Champions League.

- Apparently, Sir Alex Ferguson knew what he was talking about when he said that FCP buys championships in the supermarket. That was said at the time of the clash between FCP and Man Utd in 2003/04, where FCP beneficed from a Man Utd legal but invalidated goal and also the season of the majority of the phone calls recorded.

After reading all that I am now worried about Arsenal's game against Porto..

oh my God we dont care about Porto and Im not going to read that novel.

I just want to know, the arsenal fan from istanbul.. are you turkish or english?

It was extremely interesting for me to read that post. Thank you for it. I like such topics and anything connected to them. I would like to read a bit more soon.

Nice blog as for me. I'd like to read more concerning this topic.
By the way check the design I've made myself Female escorts

By the way, use GSM blocker to block all secret devices in your home or at work.

Great opinion you public here.
It would be great to find anything more concerning this topic.
Thx you for giving that information.
With best regards Allan!
blonde Kiev escort

Great stuff from you, man. Ive read your stuff before and youre just too awesome. I love what youve got here, love what youre saying and the way you say it. You make it entertaining and you still manage to keep it smart. I cant wait to read more from you. This is really a great blog.Couldn?t be written any better. Reading this post reminds me of my old room mate! He always kept talking about this. I will forward this article to him. Pretty sure he will have a good read. Thanks for sharing!blonde Kiev escort

I am Glad i discovered this blog.Added arsenalanalysis.blogspot.com to my bookmark!

I'm Glad i came across this website.Added arsenalanalysis.blogspot.com to my bookmark!

I am Glad i found this website.Added arsenalanalysis.blogspot.com to my bookmark!

I am really Glad i came across this website.Added arsenalanalysis.blogspot.com to my bookmark!

nice your blog and very nice dear your blog Ranking is too Good we like its you can see our also website for online shopping......
laptop batteries

Wow, this paragraph is nice, my younger sister is analyzing these things, thus I am
going to tell her.