Arsenal can win at Old Trafford if two weaknesses are corrected

Arsenal’s performance against Partisan Belgrade was so typical of late. Play was dominated, possession was around 60% throughout and the opponent was down and almost beaten when the first goal went in.

But yet again we manage to gift them a goal.

Do you remember Aston Villa’s first goal at Villa Park? Clichy decided to switch attention away from the opponent who was ready to shoot and backtracked to cover someone else.

Sqillaci who is a far more experienced defender did exactly the same last night. Instead of marking the goal scorer he backtracked to mark someone else. The first rule in defending is surely to stop the opponent from scoring isn’t it?

I was worried throughout last night’s game. Our defending was far below of what can be characterised as average. The two new defenders brought in this year appear not to have jelled together, don’t cover each other well and lack communication.

I think that unless they play a blinder against Manchester United we will be leaking goals right left and centre. I really do and if you think I am being overly pessimistic then you are letting your heart rule your head.

This weakness in my opinion can only be mitigated by selecting Djourou in the starting 11. 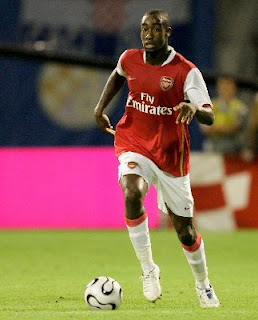 Not that he is not prone to errors but he is obviously much more battle prone and hardened in the rigours of the Premier League.

And he has been very impressive this season showing positional awareness and strength, both in the air and on the ground.

Unlike our French pairing in central defence, Fabianski has not been giving me the jitters. He has impressed with his very competent all round display and has been keeping us in games recently.

The save from Fulham’s Kamara at 1-1 was as crucial in my opinion as Nasri’s winning goal. And I have a suspicion that Almunia would have been found wanting last night when that shot from outside the box, when the score was 2-1, looked goal bound.

The other weakness that was very obvious last night was the absence of a playmaker.

Song and Denilson are defensive midfielders of course and we shouldn’t expect that they will take up playmaking responsibilities. The decision to play van Persie in the hole behind Chamakh did not work in my opinion.

He was much more up field than dropping back to pick the ball and direct play. This meant that Denilson and Song had more responsibility placed on them to do the playmaking.

When Fabregas returns then indeed van Persie and Chamkh could be paired up front with Cesc dropping back to his original role of dictating play from a deeper position.

Rosicky would have been ideal last night. And I insist that he should start at Old Trafford on Monday with van Persie dropping back to the bench. He is not yet 100% fit and it’s better to bring him on late in the game as an impact substitute rather than having to sub him.

In this way we gain a playmaker and a stronger bench.


Posted by Arsenal Analysis at 6:08 PM

Djourou has played well recently, but he has a persistent tendency to get on the wrong side of a forward being played through. United will be licking their lips at our defensive disorganisation. I fear a hammering.

Can't just blame the defenders. Too often the midfielders don't track back forcing the defender to make a choice they should have to and won't always get right.

Arsenal can not win at Old Trafford.The end.

Arsenal WILL win at Old Toilet, but the author of this blog is a sanctimonious patronising twat.

Arsenal will win at Old Trafford. The end.

Wenger has been playing a very dangerous system at the moment. We are pushed too high up the field with most times marking man for man at the back.

I couldn't believe my eyes during the Fulham match when Kamara latched onto a ball over the top from their penalty box and Squillaci just got a foot in. Song is far too forward so we have no cover in front of CBs and they don't look up to the muscle side of things.

Djourou is playing well at the moment just check is his stats but, he does manage somtimes to find himself wrong side of attackers.

Utd will do a job we won't recovery from if Wenger doesn't fix up.

The end is nigh

Denilson is not a DM, not a CM and not a AM too. He has nothing in him being a footballer, he should retire.

A win at OT is in the wind. As bad as we see our defense, I see NO reason to fear the Red Devil rearguard. I can see the end result being a nervy yet table-strangling 3 - 2 scoreline.

Let's all face it, Wenger doesn't care about defense as much as other top managers do.
The teams we have been truly been beaten by are those where we switched off or have gotten behind and tried to chase.

U already said my mind buh frankly am expecting a starting XI of Fabianski,Sagna,Djorou,Koscielny,Clichy/Eboue,Song,Wilshere,Rosicky,Nasri,Asharvin,Chamakh...in our usual 4-2-3-1 formation buh Les Boss should better order Song to sit deeper n let Wilshere n Nasri do the roaming,in front of him.

U already said my mind buh frankly am expecting a starting XI of Fabianski,Sagna,Djorou,Koscielny,Clichy/Eboue,Song,Wilshere,Rosicky,Nasri,Asharvin,Chamakh...in our usual 4-2-3-1 formation buh Les Boss should better order Song to sit deeper n let Wilshere n Nasri do the roaming,in front of him.

the issue for me is that Koscielny has a tendency to attempt far more interceptions than most defenders. This looks good on the 70% of occasions that it works but on the remainder it leaves the defence exposed with attacking players in behind. This was the real reason that Squilacci was exposed against Partizan. Without Fabregas we either have to play Nasri in the centre or at least play Wilshere as one of the central midfielders otherwise we are devoid of invention and certainly RVP had no chance of filling that role.

The Denilson haters are out again-this is the thing about many such Arsenal followers-they actually are not supporters at all-they hate their own players.
United are a team virtually designed to beat Arsenal-they are stronger all over the pitch. Arsenal cannot defend to save their lives. Rooney and Berbatov will have a field day. At least 3-0 maybe more.United are in a different class.

Frankly if Arsene plays the same system of 99% possession and 100 shots and one goal,I can only see the gunners getting beaten.His game plan of pressing and high defence line is well known or back firing if you like.
I am afraid if the gunners don't defend and stop leaking goals they will be beaten.That is not to say the gunners can't win. They can if they get the basics of defending right and Wenger forgets his mantra of outscoring the opposition.We all hope he wont be like Keegan.
Needless to sy if KK had bought a reliable defender than a scorer,NU could have won the title in 1996.
Btw if the gunners concede the first goal dedspit numerous chances and 200@ yes 200 % possession,it will be a case of I told you so. Just look at the videos of previous games where the gunners lost to the redefaced and you will know what I mean. Of course the gunners have new and hopefully better cd than before.

man utd 4-1 arsenal only sagna can defend weell others defender are useless!!!!

This is a winning line-up:
Fabianski
Sagna Koscielny Djourou Clichy

Expect nasri to be surounded by at least two or defenders. That's when Wenger's game plan comes in. Don't put all your eggs in one basket.Similarly the gunners should detail at leat two defenders to mark the brit pit bull.If you look at past videos the pit bull was totally unmarked when he scored.
For this to happen ,Wenger must have defensive options for the players.
Btw i expect a tough game with flying tackles. Arsenal must give as good as they get.

Hi, i just want to say hello to the community

You'll want to add a facebook button to your blog. I just bookmarked this article, although I had to complete it manually. Simply my $.02 :)

Lee, which has received the Ash, Stort, and other tributaries, draining large areas of clay and liable to frequent floodings; The North Face Sale but it cannot be doubted that, if proper measures be adopted to protect the river from avoidable pollution, a great improvement in its purity will be secured.Such a system of protection of the water of the river Thames has already been inaugurated by the Act of last Session. We recommend that similar protection be secured to the water of the river Lee b}' the early action of Parliament. The question whether a navigation should be allowed to continue a proper conduit for water destined for the Metropolitan supply is one which deserves serious consideration.Water Supply of North Face Outlet Towns in Lee Basin.—Water is abundant throughout the valley of the Lee. Notwithstanding this, however, some of the towns are badly supplied, and sickness is distinctly attributed to the use of well-water polluted by cesspools. At Tottenham, Edmonton, and other towns the mains of the New River and East London Waterworks Companies are accessible, and are to a limited degree used; Shape Ups Shoes but some dissatisfaction is felt at the rates charged by the Companies, and at the exclusive right of the Companies to use the water of the Lee.Conservancy,—Hitherto, the management of the Lee, so far as there has been a management, has been vested in the Lee Trustees; but as before mentioned, the jurisdiction of this corporation is confined to the navigable channel, and it is only as incidental to their duty to protect the navigation that they possess any authority Shape Ups Boots to prevent pollution or to regulate the height of water and other matters. In their hands the undertaking has been a commercial success; the navigation is well maintained and it is a valuable convenience to towns on the banks and to districts inaccessible to railways ; also the river improvements Skechers Shoes have been found beneficial to the health and comfort of the inhabitants of the valley. Abuses by mills, which in the Thames valley cause such disastrous floodings, have in a great measure been controlled in the Lee. Nor have the Trustees, in the exercise of such powers as they possess Discount G Star Sale for the protection of navigation, been remiss in restraining the pollution of the lower part of the river. Altogether they seem to have administered their Trust well.

Knowing how to make a Brass Bracelet just takes a little creativity and imagination. The very definition of fashion is individuality. Brass Necklace has provided a wide range of style in the past few years. It can dress up just about any outfit or be an accessory to your personality. Making your own Brass Pendant is next to easy. Recycle a piece of old brass and make it into a vintage cuff bracelet or spruce up a bracelet you already have. Brass Findings you'll need: Various beads, glitter, Brass Button or other decorations; Blank brass cuff or Brass Pin; Two-party epoxy glue; Lacquer spray; Brass Chain for a necklace. Lampwork beads have nothing to do with actual lamps as we know them today. jewelry beads

Quite effective info, thanks so much for the post.