We run, as we always do after a match, a poll as to who was Arsenal’s Man of the Match against Aston Villa. On this occasion the vote is almost overwhelmingly for one player. 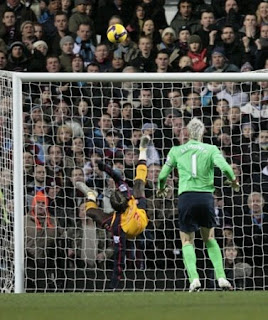 Bacary Sagna is receiving the bulk of the votes with about 70% of those Arsenal Analysis readers taking part on the poll.

And he deserves it hands down.

His performance is probably the best ever in an Arsenal shirt with fantastic interventions culminating in that phenomenal clearance off the line of what looked a certain goal.

Arsene Wenger has unearthed some gems in the transfer market over the years and Bacary is certainly there at the top of the list.

Here are our player ratings for the game at Villa.

Almunia: Some exceptional saves keeping us in the game but with a few mistimed runs out of his area. 7

Gallas: Good in the first half, poor in the second culminating in that penalty. 5

Toure: Clearly not ready, physically nor mentally, to participate in this game at such a short notice. Full of mistakes and bad clearances. 4

Song: Average performance till he had to go off. 5

Denilson: Full of energy and his persistence resulted in that first goal. 7

Eboue: Good performance, kept to his defensive duties well and made the beautiful assist for Diaby’s goal. 6

Nasri: Did not contribute much. Kept loosing the ball and was only a peripheral figure. 4

Diaby: Awful in the first half much improved in the second culminating in that fantastic goal. 6

Van Persie: Kept the ball well up front and combined well with team mates. Missed that chance to score the killer third goal (we need 3 goals to win a game now not 2). 6


Posted by Arsenal Analysis at 3:57 PM

Sagna is currently the bst right back in the world

Some people are happy that he is injured - but there is not another experienced defensive-minded midfielder in our squad. Who the hell else is there to play in this position?

Sagna is class, but this season he has lacked sharpness, yesterday was the best he's played since April.

I thought Song did ok, he was strong yesterday and just needs to learn better positioning.

I cant work Diaby out, he is either sunday league or world class. If wenger figures out where and when he is most effective, he could become a great player.

Denilson is growing, he too could become World class before long.

Almunia was poor, he has terrible rational even though he is such a brilliant shot stopper. Not good enough.

We need a centre back and a winger....

Almunia's ratings are way to high.. I would give hima a solid 4 since he was under average. You should explain how you give them the ratings, maybe if i was rating little league football, ok a 7 to make the kid happy....

We need 4 new Sagnas to be a top 4 team, we are genuine Uefa Cup fodder at the moment.

Silvestre was ok in LB aswell

its our central defending that lets us down