Promising 16 year old Brazilian Matheus Indio has been on trial at Arsenal since the 10th February.

Indio, as he is known, has a contract with Vasco until May 2015 and has played for the under-17 Brazilian national team. He is considered as one of the most promising youngsters in Brazil.

His dream is to eventually play for a big European team. He cannot do this at the moment as he cannot sign professional terms for Arsenal until he is 18 which will be on the 28th February 2014.

His idol at Arsenal is Theo Walcott. 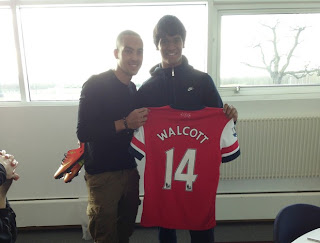 ‘I really like Walcott. He has a fast style of play, which pleases me greatly’ he said to Brazilian sports paper ‘Globo’

And he did get his chance to meet Theo at London Colney and, as the photo shows, he has been given Theo’s Arsenal shirt and boots!


Posted by Arsenal Analysis at 6:33 PM

This shows that we must never let our top players leave the club. They act as a magnet for aspiring young stars to come to Arsenal and try and emulate their heros.

Great scoop to get this photo