Appiah refuses to go on trial 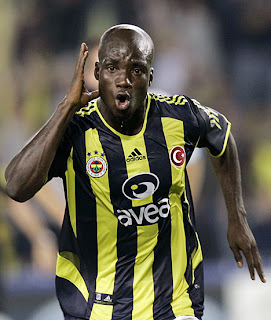 Stephen Appiah was a much wanted man up until very recently when one team after another was reported to be withdrawing their interest.

First it was Arsenal with Arsene Wenger stating that he was not in talks with the player. Then Harry Redknap of Portsmouth pulled out saying that he couldn’t afford the player. The same came out of Paul Ince's camp at Blackburn.

West Ham themselves with their strong Italian connection in their Sports Director Gianluca Nani were in direct contract negotiations with Appiah up until very recently when their Icelandic owner was severely hit by the present financial crisis.

Gianluca Nani himself was Brescia’s sporting Director prior to joining West Ham this year and Brescia were the club who kindly let their ex player, Appiah, train with them recently in order to regain fitness.

Negotiations with West Ham which reached the point of agreeing a £40,000 a week salary were far advanced.

But other reports suggested that Appiah was asking for even more, £60,000 per week, which seemed to have put Redkanp and Wenger off.

Appiah himself has responded angrily to these accusations:

“I’m not like that; I’m not greedy at all. I have never been greedy so it’s not going to change anything for me” he said.

It appears however that the real reason for Appiah’s inability to agree terms with another club is that aspiring suitors still have some doubts about his fitness and the state of his knee.

The player has been out for almost a year after a botched knee operation in Turkey when he was on Arsenal’s Champions League opponent, Fenerbahce’s books.

Such was the incompetence of the doctors that when Appiah complained of breathing difficulties after the operation they diagnosed asthma! The real reason for his problems however was the blood clots he developed on his left leg.

Appiah’s first competitive game since out of action was a World Cup Qualifier against Libya last month and it went as well as could be expected. 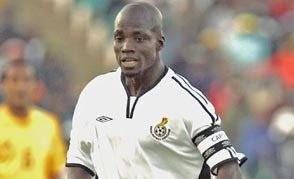 But it seems that the real reason for not finding a club is his refusal to go on trial.

“If they want to check me out in terms of fitness that is fine but don’t tell me to get on the field and play for you to see how good I am because even if I am sleeping and I wake up I can play” he said to the Ghanaian press.

Arsenal have a habit of asking players to go on trial. They had recently another midfielder, Brazilian Mineiro on trial who eventually, after being rejected, found himself at Chelsea.

So the search by Appiah for a club goes on…
Posted by Arsenal Analysis at 2:07 PM

You did this the last time as well...stop putting Junior Agogo's picture as Appiah!

Good update though - I dont think AW was ever interested, dont think he is good enough

I am sleeping and I wake up, does that mean I can play for Arsenal too?

Thats not even Appiah ffs! omg theese "blogs" are soooooo not woth my time.

i knew this would happen where once people in England had heard about Appiah they would say they dunno if hes good enough .

Some guy on here above apparently said he doesnt think Appiah is good enough.

Im ghanaian and i dont think you understand something. Appiah is the best Ghanaian footballer there is and has been for years. When people kept going on about Essien i kept tellin them that Essien aint even our best midfielder. Any knowledgeable Ghana fan will tell you that. Appiah does Essien`s job but controls the game from any area on the pitch , and i mean ANY area,he`s a very powerful centre mid who can play on either flank and he doesnt get tired , he can hit a 30 yarder similar to Muntari from distance and he`s a very astute tactician in knowing when to spray long passes or short, defend or attack.Similar to Gerrard in that he likes to be all over the pitch controlling the game. Once he gets full fitness ive been praying Liverpool get him but it wont happen knowing Benitez. The thing workin against Appiah is that cos he`s been in Italy then Turkey not too many fans in England knew about him til before teh german world cup when he starred.

I repeat , this guy is the real deal and is the reason why Essient aint Ghana captain.

But like i said. If you dont know Ghana footballers well you aint gonna know this.

respect to the last comments. Appiah is the reason why Essien is not captain. Our capito THE TORNADO is the best. smart and tactical, he was the backbone for Ghana's success 2005/2006. Essien by his side makes magic magical. NB: I said Essien by his side not the other way around. I think any club would be lucky to have him. (Look what he did for Fenerbahce)