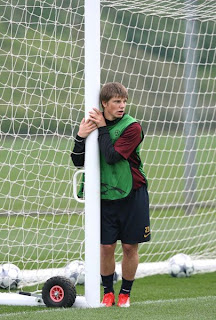 Andrey Arshavin has been speaking on his site about the game at Old Trafford and offered an excuse as to his rather quiet showing.

He is in fact still suffering from the after effects of the flu that had originally forced him to miss the game against Chelsea in the League last week.

“In fact even today I still do not feel very well. I still feel the effects of the flu and have not yet managed to fully recover. On the other hand, I am glad that I played in this match, at a beautiful stadium, against this opponent”.

However he considers that even with him having a quiet day Arsenal played very well.

“We played very well. Our team did not allow the freedom to our opponent to start attacks easily so Manchester United was not able to show its strengths”.

“But they are one of the best defenses in the world. We did everything on the pitch to win. If we had scored the game would have gone a different way”

Andrey believes that the players played for their pride and wanted to show that the quality of the team deserves to finish above fourth spot in the League.

“We wanted to show that our club is not so weak as to be only the fourth in the League. I think we proved it.

“My club will go on another holiday ... But, I hope, that (next season) we can experience at the «Emirates» the same feelings, emotions and the joy of victory in the English championship”

We hope so too Andrey….

Posted by Arsenal Analysis at 10:16 AM

Agreed, Song was fantastic, but we still need defenders.

MESSAGE TO ALL ARSENAL FANS: from next season, get behind the team 100% especially at home games as these young players need full support not boos.

When Arsenal lose it hurts a lot but when the fans boo their own shirt it becomes unbearable.

Anyone see the Baggies fans today towards the end of the game today? Even though they were gutted about being relegated, they didn't turn on the players or manager but sang their hearts out for their team. That's true support, Arsenal could learn a thing or two there

would you boo you child when they get bad results at school...?

no. you would encourage them to do better next time. also support them. you would help them with their studies etc.

same with football fans and players.

I really like Arshavin and imo he is currently the best all-around player at Arsenal. Let's hope he remains focussed and humble so that he can become the next Bergkamp-type player that we have been so sorely missing. If we can get Sakho it would be great as despite his age, with Toure and Gallas to mentor him, he could be the key to us getting a centrehalf pairing to be taken seriously.

I wouldn't boo my child for getting bad results at school but I would have a go at them for not trying hard enough in the first place as this would be a normal reaction to something disappointing.

I'm not saying that winning trophies is a divine right for our club but we should be at least be in within a shout of the title and not to have blown the chance by the 10th game of the season.

If the players on the pitch arn't performing when were are 100% behind them then what are we supposed to do.

You get all the other fans going on that they don't boo their players but when their team plays rubbish you know that they want to do it themselves.

We boo'd eboue because he was playing awful but guess what it made him a better player for the rest of the season. We as fans pay the players wages and we demand the best from our players it's the nature of the beast.

You don't boo your child if he/she doesn't do well at school. Beatings are far more effective, trust me.