Arsenal’s squad is stronger than many people think


Look at Chelsea’s injury list and compare it to Arsenal’s. You will see that Arsenal have seven players out whereas Chelsea have one! A certain M Van Ginkel.


Arsenal’s players out are strong candidates for a start in a PL match.


So I get irate when the consensus on the game in The League Cup against Chelsea was that their reserves were better than Arsenal’s! They are not when everyone is fit. They were on Tuesday night of course.


One aspect that they would have been better on any night is their organization and discipline. I think that this is what Mourinho and his back room staff are probably better than Arsenal’s.


You saw that even if they were playing with a second eleven they had a professionalism about them and each player knew what they were supposed to do at any given situation. Even newly arrived Willian was chasing back to cover for his defence. I was impressed.


Where the press is right however is that Arsenal are light in two very key positions lacking adequate back up players.
Giroud and Flamini of course have been crucial so far. 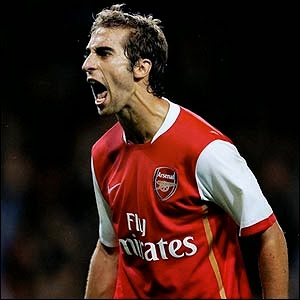 Flamini’s absence is very hurtful. We don’t have any other player that can play that selfless destructive role in front of the defence.
And he is out till the 23rd of November, during our most important period where we take on Liverpool, Man Utd and Dortmund among others.
Which means that in order to come out of this period relatively unscathed we will need to get the better of our opponents by outplaying them in a kind of “total football” where movement, flexibility, ball possession and speed of play force them into submission.


Just as we did against Napoli at the Emirates.
It will be an either all or nothing situation for Arsenal I am afraid. But if it is all rather than nothing then we will make a very strong statement that the title will be ours.


Posted by Arsenal Analysis at 9:15 PM

Common sense, thank you ! Had Podolski and Walcott been fit over the last few weeks, no one would have commented on our lack of depth up front. No other team has had to deal with 6,7,8, or even 9 injured players. I would love to see how Man u, Spuds or Loserpool would cope with similar situations.

We could take this argument even further. Wenger has failed to replace Flamini after his first departure to the same effect. Without an effective defensive midfielder the EPL is hard to win. Wenger just does not rate that position very high.

I totally agree with you Wenger should have acquired the services of Capoue before Spurs got him that would have given us all the back up we needed. Flamini though a good player has struggled with injuries the last few years all the same it was a master stroke by Wenger to get him on a free but for him to not buy a proper DM shows he clearly doesn't srate the holding position. All the teams to achieve any form of success in the last few years Bayern, Barca even Dortmund all have top draw holding players to let their flair players do the rest. This might hurt us if Wenger continues to to overlook this position come January.

If frimpong is fit,bring him to replace flamini,he can do the dirty job.

Frimpong? Are you drunk?