Every successful Arsene Wenger team had an unsung hero playing as a defensive midfielder. Vieira, Petit, Edu and Gilberto Silva to name but a few. 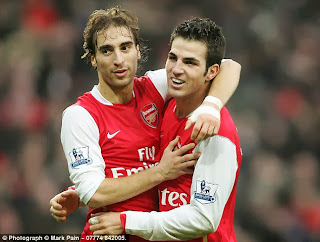 They provided the steel in the middle of the park, in front of the defence playing no nonsense football winning the ball and giving it to the creative players.

Every team needs these players in order to provide the right balance between creativeness and hard graft.

This Arsenal team has been lacking this type of player for a long time. Flamini came in this season out of the blue and started putting it about, winning tackles, being there when the opponents were counter attacking and dishing out orders left right and center.

"A controlled experiment is when  it isolates the effect of one variable on a system by holding constant all variables but the one under observation".

And we had exactly that when Flamini went off against Norwich with concussion (in the 37th minute). Ramsey came in and had a wonderful game but defensively we were not the same.

Suddenly there was no shield in front of the defence. Ramsey was stationed in a more advanced position and the opponents were able to gain more control in the midfield. As a result they had a period of ascendancy pressing us back and having dangerous shots on goal.

What stopped that was Ozil's second goal which in a way didn't come about out of dominance but from a counter attack.

Flamini is now the first name on the team sheet. His injury may keep him out of the Dortmund game and that will be a problem. Under such circumstances there are no other Arsenal players that can be so effective in the defensive duties. They are all ball players and creative individuals and asking them to curb their natural instincts restricts their game.

Under such circumstances the team has to totally dominate the play and the opposition to submission in order to win the game. Like Barcelona do.

This team is so exciting that with the addition of a viable and capable defensive midfielder as well as an understudy to Giroud will probably make them world beaters with the PL and CL titles within their grasp.

Any chance of Song coming back? He will be ideal.

Posted by Arsenal Analysis at 8:39 PM

Song had less discipline than Wilshire in that position. I wouldn't take song back on a free

Unless frimpong is promoted then I think Song would be ideal

We conceded a lot fewer goals last season without Song than the previous season with Song. End of argument in my opinion. He was not disciplined enough and gave away far to many free kicks in dangerous areas.

Song rarely played in that position for us. Denilson and Arteta have played the deeper role when in the same side as him and Diaby was playing deeper than him last time they were in the same team. I'm quite sure he can do it, I seem to remember him doing it a few times, notably nullifying Rooney in a win over Utd but people assumed that was always his position and that he "lacked discipline" because he always moved a bit further forward, but I think his role was to support both the defence and attack. Had that not been the case there's no way he'd have lasted so long at Arsenal. He's not a bad shout but I think we're after someone new. Besides, the Ramsey-Arteta thing was working brilliantly at the end of last season and I don't think you can claim it doesn't work anymore on the back of a fairly short period of one game.

Song is too slow. Not a good option

I think we should incorporate Frimpong into the team while The Flame is still with us...:)
GoGunners4Eva