Song is a contradiction. He is a box to box defensive midfielder 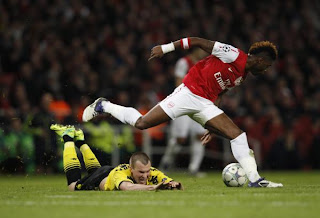 I remember when I had the chance about four years ago to watch Alex Song play against Manchester United at Old Trafford. He was then on Loan at Charlton Athletic when they were in the Premier League.

He was man of the match. He controlled and dominated the central midfield areas on his own against the Man Utd midfielders. At Old Trafford of all places. It was then that I realised that we had a gem there that nobody outside the club really new about.

I wrote as much in one of my blogs then and luckily I was not proved wrong.

He was immense in the second half last night against Dortmund, improving on his average, for his standards, first half. He completely dominated that central midfield area, defended effectively in front of his back four, won nearly all his tackles, distributed the ball with ease and of course went forward like a seasoned attacking midfielder.

He is often spoken as a defensive midfielder. He is nothing of the sort. He is a genuine box to box dynamo.

He can tackle, he can pass short and long, he can head the ball, he can dribble with ease, he can provide the goal assists and he can score. What else do you want?

He reminds me a lot of Bryan Robson the Manchester United midfielder who was one of England’s finest box to box midfielders.

Alex Song was bought from Bastia in France for 1m pounds in 2006 after spending one season on loan to Arsenal. He is now 24 and I think he is worth at least 30m.


Posted by Arsenal Analysis at 5:15 PM

I always said this guy was class. He holds the ball better than anyone else, tackles and actually creates. Wenger really likes him. Better than fletcher in my opinion and could be about to rival Essien...
Sabrerat

He has always been a force within the team and also creating loads of scoring and assist opportunities. I'm really happy for him that he is now being given credit for his work ethics, which is phenomenal. His calmness in the midfield is unbelievable!

The praise he is receiving recently is so late in coming as to be insulting (not aiming that at 1970s gooner, who clearly did realise it at the time). Since he started playing consistently and got his head around 1st team football, about 3 years ago, he has been our most consistent and important performer by miles.
As much as I love wilshere, there is little difference between the way he started his 1st team career, and the way Song did (although maybe Alex took a couple of extra months to really get going), and it saddens me a little that Song was not thought of as highly as Jack is now, because I believe they both have the same level potential, given that they are slightly different types of player.
Anyway, agree with the article. I guess people just see him taking the ball from an opponent, nimbly sorting his feet out to quickly beat players and move the ball on, and it reminds them of makelele. When he does sit back, we do tend to own the midfield a bit more than when he attacks, and so I think people do prefer it when he doesn't venture forward too much. I see that as a compliment to his defensive ability, but it's true, he is a much more gifted attacker than many people realise.

I always said this guy was class. He holds the ball better than anyone else, tackles and actually creates. Wenger really likes him. Better than fletcher in my opinion and could be about to rival Essien... Sabrerat