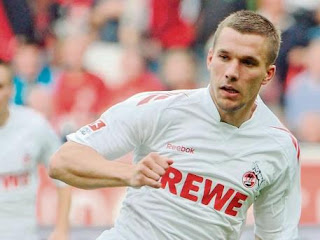 Lukas Podolski has told FC Koln that he has decided to move to the Premier League and that his chosen team will be Arsenal.

Information coming out of Germany indicates that all that is left for the move to happen in the summer is for the two clubs to agree a transfer fee.

Podolski’s contact runs out in 2013 and apparently Arsenal are willing to pay 15.250 m a sum which is expected to satisfy his present club.

Apparently Wenger made a move for Podolski in May 2011 offering 17m and again in November for 19m! But FC Koln were not willing to sell and Lukas himself did not want to move in mid season.

In addition to the transfer fee Podolski’s wages are expected to reach around 82.000 per week or 4.3 m per year!

This indicates that Arsene Wenger is already planning for next season in an attempt to avoid the last minute transfer fiasco of last summer where two major players left and three players came in on deadline day.

It also indicates that he is seriously worried that RVP will be unwilling to stay unless Arsenal show real intent in challenging for honours next season by bringing in quality signings.

Posted by Arsenal Analysis at 6:26 PM

Call me sceptical but this happens every year.
Anyone would think it's season ticket renewal time. Oh wait...

Just one minor point where you put Arsenal's previous names at the top of your page you have forgotten one. After Woolwich Arsenal we were called THE Arsenal and they dropped the word THE so that we would be first alphabetically.

Informative article, exactly what I wanted to find.