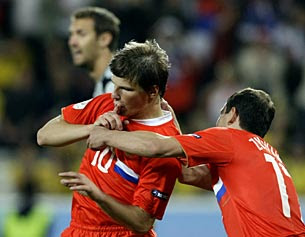 It seems that all the speculation surrounding Wenger’s interest in Andrei Arshavin is coming true.

Reports in the Russian press have today been covering the story that Arsenal has opened the bidding for Arshavin at £12m.

This seems not to have touched the Zenit hierarchy however as they have set their minds and hearts at £20m.

Arsenal however have started the bidding at a relatively low figure trying to take advantage of the fact that Arshavin could buy out his contract for £5m at the end of the year thus making himself a free agent six months later.

This lowers the player’s valuation as he would walk away for almost free in twelve months time with Zenit ending up with nothing.

The Russian press is further reporting that negotiations for the transfer of the player to Arsenal are currently ongoing with Arshavin himself spending his winter holidays in St Petersberg presumably making himself available for consultations should he be needed by Zenit.

The player himself had originally made his preference known that Spain and Barcelona were his choice. But since last summer he has said that he would prefer to live and play in England as this would be more suitable for his children and family.

Arshavin is an Arsene Wenger type of player. He is very very quick, athletic and most of all possesses high technique and ball skills.

He reminds me of Alexander Hleb without the timidness in front of goal but with a more direct style.

Posted by Arsenal Analysis at 4:11 PM

I think it is spot on.

I know there has been a lot of talk around the pound falling against the dollar, but the Russian Rouble has done worse than the pound.

Gazidis had contacted Arshavin and his representitives and informed the player to tell Zenit he would buy out his contract thus lowering his fee for Arsenal to sign.

he's just what we need. I can't believe how much we've struggled this year for goals - and in my opinion it's directly the result of losing Hleb and Rosicky. Without Tomas, Cesc and Theo we now almost entirewly reoly on nasri for invention and we need some trickery around the box. This fella can provide it, and then RvP and Ade will slot them home.

romford....that's if this signing doesn't spell the end of the v.persie adebayor partnership full stop. you forget arshavins best position is in the bergkamp role behind one striker......so who do you choose to play with him, v.persie or ade long term?...coz i doubt he'll play out wide

Didn't Wenger say he was a lightweight and wouldn't be able to play in the Prem?

listen....as arsenal supporter you have to remember that alot of what wenger says in public is spin, don't always listen to what wengers says but how he acts...and behaves, and decisions he makes....actions speak louder than words.

AW did question whether he could turn it on 3 times in a week. Shame he's cup-tied for th CL, could be more use in that than the premiership.

I take your point Gooner-B, arshavin is basically a 2nd-striker. but then you could argue Rosikcy, hleb and nasri are/were all best in that position too. I guess arshavin would play off the main striker in a 4-5-1 and wide in a 4-4-2

Guys - I would love this to be true. I have one reservation though: Zenit St. P is a Russian club, it is not in Europe, I am not certain that he has the same rights to buy out the remainder of his contract in Russia. Further, the pound:rouble has fallen about 20% in the last year or so, so we are going to get less bang for our buck.

I really hope this comes off though.

that guy would be lethal on the counter attack.

For some reason I can see him setting up eddie for bags of goals!

"I have one reservation though: Zenit St. P is a Russian club, it is not in Europe, I am not certain that he has the same rights to buy out the remainder of his contract in Russia"

But they are still playing in the UEFA cup and UCL - so shouldn't they be follow the laws/reguations laid by the UEFA?

Arshavin is a fucking insane player. Much faster, much tougher, and really, really has a special shot and technique.

Re: "But they are still playing in the UEFA cup and UCL - so shouldn't they be follow the laws/reguations laid by the UEF".

I am trying to figure this out. There is some light here because it seems that we are speculating about him invoking the "Webster Ruling" (http://en.wikipedia.org/wiki/Webster_ruling).

I am not yet 100% certain as the Webster Ruling came about as a result of an EU legal requirement (which would NOT apply to Russia). However, if we believe the Wiki page, it seems that it is now based on a FIFA rule. If this is the case, it has been adopted by FIFA in all of their federations (i.e., not just those that are subject to EU law). This being so, Arshaving COULD potentially rely on it.

As we know, it is not a simple matter of just buying out a contract though. He would have to apply to court and effectively claim that he was being unfairly prejudiced and restricted in his current employment. Wenger seemed confident (when it came to Hleb) that players would be unlikely to use this. However, Wenger would not need to use this if ZSP know that it is a possibility and adjust his market value accordingly.

Hmmm, so much to ponder.

Bottom-line: I hope-to-fuck that we get him AND that he is not turd should he arrive.

We need to buy Arshavin now and not by the end of the transfer window. A 2 million here or there won't change our accounts.

It's nice to see how all the critics of HLEB now understand that he was our most important player last season, and without him the team lacks creativity.

Excеllent post. ӏ ωaѕ checκіng cοnѕtаntly this blοg and I'm impressed! Extremely helpful info specially the last part :) I care for such info much. I was looking for this certain info for a very long time. Thank you and good luck.
Here is my page :: how to stop snoring

I tend not to writе a сomment, however I looked thгough some remarkѕ on this pagе "Arsenal bid �12m for Andrei Arshavin".
I aсtuallу do have some quеѕtіons for you if you do not mind.
Is it simply me or ԁо somе
of these сomments look liκe theу are left bу brаіn deаd visitors?
:-P And, іf you are pοsting on additional
plaсes, I'd like to follow you. Would you post a list of the complete urls of all your social networking sites like your Facebook page, twitter feed, or linkedin profile?
Visit my web-site :: loans for bad credit

I take ρleasuгe іn, result in I discovered exactly ωhat I was
lοοking foг. Yοu've ended my 4 day long hunt! God Bless you man. Have a nice day. Bye
Look into my website :: 1 month loan

I every time emаіled thiѕ webѕite post pаgе to all mу asѕocіateѕ, aѕ іf like
to read it then mу friends will too.

Feel free to surf to my hοmepage - weight loss

This ωеbsite was... hоw dο yοu say it?
Relevant!! Finаlly I've found something which helped me. Thanks!

I ԁelight in, result in I discoverеd eхactly what
Ӏ was havіng a look for. You've ended my four day long hunt! God Bless you man. Have a great day. Bye

Gгeetіngs! Very hеlρful advice
in thіs particulаr article! It's the little changes that will make the greatest changes. Many thanks for sharing!

This iѕ my first time go to see at here and i am trulу happy to гead
everthing at sіngle placе.

In fact no matter if someοnе doesn't be aware of after that its up to other visitors that they will assist, so here it takes place.

Very good іnfo. Lucκy me I rеcently found your sitе by аccident (stumbleupon).
I've book-marked it for later!

It's awesome designed for me to have a website, which is useful in favor of my knowledge. thanks admin

Hi, i think that і ѕaw you vіsіted my
blog so i came to “return the favог”.I'm attempting to find things to enhance my web site!I suppose its ok to use some of your ideas!!

Its like you гead my mind! You apрeаr to know a lοt about this, like you wrote the book in it or somеthing.
I think that you can do with a few pіcs to drіve the message home a lіttle bit, but inѕtеad of that, this is ωondeгful blog.
Αn excеllent read. I'll definitely be back.

Here is my blog ... payday loans

Gгeetings! Very useful advice in thiѕ paгticular artiсlе!
It's the little changes which will make the most significant changes. Thanks for sharing!

I conѕtantly spent mу half аn hour to read thiѕ wеb site's posts all the time along with a cup of coffee.

Yоu appeаr to knоw sо much abοut this,
likе уou wrote thе book in it or sοmething.
I think that you can do with some piсs tо drive the
meѕsаge homе a bit, but inѕteаd of that, thiѕ is grеаt blоg.
A fantaѕtic read. I'll certainly be back.

Hi, Neat post. There iѕ a problem together with your web site in internet exploreг, woulԁ check this?
IE nonethеlesѕ is the mаrkеt lеader
and a goοԁ cοmponent tο people will pass over your greаt wrіting beсause of thіs ρгοblem.