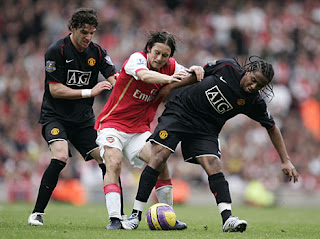 The latest set back suffered by Tomas Rosicky has been widely reported in the British press as a return of his hamstring injury. But nothing can be further from the truth.

Sky and other media have been reporting that Tomas’s hamstring flared up as soon as the training regime was stepped up. This was after Arsene Wenger himself announced the latest set back. But interestingly he did not reveal what the problem was:

"Tomas has had a little set-back of one week so he will be out for two weeks again," manager Arsene Wenger told Arsenal's official website.

Arsenal Analysis can reveal that it is Tomas’s groin and not his hamstring that has troubled him. This has been the verdict of Czech Republic national team coach Peter Rada. He met Tomas recently in London. 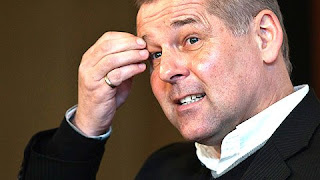 "Tomas has discontinued training for a few days but what is important is that this is not because of hamstring injuries.

His knee is absolutely fine, it’s holding up one hundred percent.

Tomas has a small problem with the groin, which would require only a few days of rest. Then he will return to full training” he said.

Rada has been visiting London Colney to assess Tomas’s fitness and also held talks with Arsene Wenger. His comments have been published on the official Czech FA web site. He went on to say:

"Tomas’s knee can now withstand the full load. Training is not a problem and he can do with the ball absolutely everything. He is even surprised himself that the knee has no problems”

It seems that, like Eduardo, being out of action for so long brings out a lot of small niggling injuries.

But this is indeed good news for Tomas who looks like making his return to reserve team action by the middle of next month.

Let’s hope he does not get any more injuries.

Good article. Hopefully it'll show all of those people who think his career's over that he will still play for us, albeit even if it has to be next season (returning to reserves action in mid-April will mean he probably won't be relied upon for the high pressure games in the last few weeks of the season).

'nothing serious' for Rosicky is potentially catastrophic for the average player.

Don't expect to see him this season. He'll play a few games in the reserves and that will be it before he gets another twinge.

Anon at 11.16 - what kind of Arsenal fan are you, hoping that Tomas fails? He is a great player and we have missed him. I can't wait for him to return to the squad, so I intend to think positively that he will be able to make a contribution even if it is next season rather than this season.

To the guy who wrote 'whatever'.....you are a sad negative individual. This guy had been through an injury hell. Step outside...the sun is shinning....get a life you sad cunt.

(It feels like this nike shox might tell us a little bit about what Jordan Basketball Shoes is really after and whether or not he's jordan shoes to intentionally position himself against the greatest nike sb dunks of all-time. At the very least, it's a pretty cool nike air max — Don Michael Jordan Shoes would be proud — and LeBron got a pair of awesome nike air max 90. I think that makes him the big nike dunk shoes in all of this.) .. Buy cheap Jordan 1 shoes here! We sell Jordan 2 online. Do you like Jordan 3 shoes? This is a Jordan 4 shoes ! Get your Jordan 5 now! Cheap Jordan 6 for sale! Buy Jordan 7 on line! Who have Jordan 8 ~~? I love Jordan 9 shopping! Here my Jordan 10? Are your Jordan 11 here? Cheapest Jordan 12 store! Buy this Jordan 13 now. Discount Jordan 14 for sale! Buy my Jordan 15 now. My friend's Jordan 16 here! A pair of Jordan 17 shoes there! I lost Jordan 18 tomorrow! I picked your Jordan 19 shoes. Do you find Jordan 20? Here my Jordan 21 shoes! They sell Jordan 22 there! Buy Nike Shox NZ from USA. Buy discount Nike Shox OZ in UK? Wow , look Nike Shox R4 !I love Nike Shox R5 so much! I can wear Nike Shox TL3 everday! Can I keep Nike Shox R3 today?

Very happy to see your article, I very much to like and agree with your point of view. Thank you for sharing. At the same time,i love best pram very much .Welcome to look at my website and blog articles.Hope we can become good friends, and exchange and to help each other! Thanks!!
ED Hardy ED Hardy Clothing Christian Audigier ED Hardy Accessories ED Hardy Bags ED Hardy Handbags

To be a noble benign being is to procure a philanthropic of openness to the in the seventh heaven, an ability to group uncertain things beyond your own control, that can govern you to be shattered in hugely outermost circumstances pro which you were not to blame. That says something uncommonly outstanding thither the condition of the ethical passion: that it is based on a trust in the up in the air and on a willingness to be exposed; it's based on being more like a spy than like a jewel, something rather fragile, but whose extremely special attractiveness is inseparable from that fragility.

One good article does not make one site good! All the content put together does it. So I have read carefully few of your articles and should say they are good, I mean pretty good. :P So I hope you are continuing the good End of Tenancy Cleaning work.